CLICK ON THE "EXPORT" TAB TO OPEN POP-UP PLAYER

Satan has stoked the fires. One big reason is to get the church to abandon Trump. However, in doing that, we also abandon our miracle. Trump is only the start of a miracle. Trump is a foot in the door—a stay of execution.  He is an act of God to buy the church time to repent and return to her rightful role in American life.

Trump is not a pastor or a moral reformer. His role is specialized and only for a season. If we don’t seize the time and the door God has opened, disaster will strike.

Consider how Nancy Pelosi and Chuck Schumer will handle the next 2 years: Endless investigations—ignoring the economy and American families—a frenzy to normalize immorality, and giving billions to people who are not Americans.

Trump annoys you? You want a saint in the Oval Office? Grow up! His foibles are nothing in comparison to the overt godlessness spewing from
the left. Instead of wimping out on Trump, blame the real villains.

You claim Trump is a miracle like King Cyrus. But Cyrus didn’t help Israel build for very long. It was up to the people of God to seize the miracle. If not for the astonishing endurance of a handful of priests, prophets, and one notable cup bearer, Israel would have remained in ruins.  (Read Ezra, Nehemiah and Haggai).

It took nearly 80 years after the king’s decree before the Temple and the wall were finished. Let me let you in on a secret: we don’t have 80 years.  If we do not learn from history—America will never be restored.  If we blow this…expect disaster. 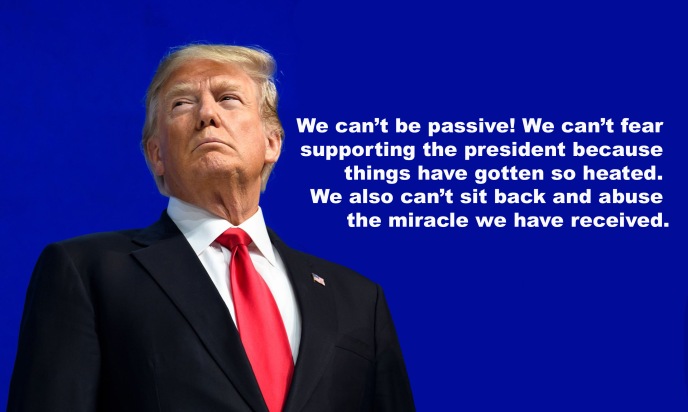 It is silly to worry about what people will think if we stand with Trump. The spirit on the left will hate you and God with or without Trump. At least with Trump we have a firewall to let us preach the
Gospel and hold on for another miracle.

We can’t be passive! We can’t fear supporting the president because things have gotten so heated. We also can’t sit back and abuse the miracle we have received.

The American church must build on the opportunity that Trump gave us. We must wake up to our task!  Our disunity is killing our cause. We must shake off the disastrous apathy and complacency that is dulling us to our duty.

There is great hope because we have gotten a miracle. Miracles have power beyond what we understand. God let this blog get in your hands so
that you would pray and obey. Don’t worry about others…just do the right thing. God will take care of the rest.

(Disclaimer: The views and opinions expressed on or in these videos/posts/links/tweets/articles/shows may not be those of WeWin Christian Radio or wewinchristianradio.com)